It’s a simple statement with massive ramifications if our society decides to use the science of color to fight global warming. For centuries cities in places like North Africa and the Mediterranean have been painting everything bright white to keep cool. White reflects the heat radiation back into space while darker colors absorb heat radiation and would therefore increase the temperature in and around the house.

Why did we abandon this simple technique that seems like a no brainer in places like Los Angeles? The answer is that it is much cheaper to use dark building materials. Asphalt and tar are two of the most ubiquitous building materials we use to construct cities and roads. The detrimental effect of building like that is referred to as the “Urban Heat Island” effect. This is why cities are generally much hotter than the surrounding countryside.

In cities with ample precipitation, the best solution involves plants on places like rooftops and vacant lots. The city of Boston buried it’s largest highway and built a giant park in it’s place. The “Big Dig” was a disaster as far as construction projects go but the original concept was great. (When I was ten years old, the Major of Boston told me the Big Dig would be done in five years…I am now thirty and they just finished.)

The problem with this approach in Los Angeles is the complete lack of rain. No one should be watering large lawns because it’s just downright irresponsible. Replacing lawns with fake grass actually contributes to the Urban Heat Island and also destroys whatever ecosystem existed there before. Residents of Los Angeles can enroll in a rebate turf removal program whereby you replace the grass with drought resistant plants and get money back from the city. 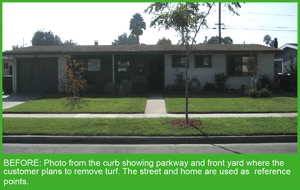 Of course if you can’t get people to vaccinate their children, the concept of deadly irresponsibility may not be salient for the residents of greater Los Angeles.

If you want to be a responsable member of society, however, paint white and tear up all that thirsty grass.