Are you ready for the big one?

A new earthquake forecast model has been released and the movie San Andreas shows us what might happen if a large earthquake hits Los Angeles. The good news is a tsunami won’t happen, the bad news is the likelihood of a magnitude eight or higher has increased. High rise buildings are not likely to fall over but getting drinkable water will be a problem.

The report released by the US Geological Survey has revised the probability of earthquakes along the San Andreas Fault. Prior to the 1994 Northridge quake, major faults were thought to be the cause of major quakes. The Northridge quake, however, occurred on a previously unknown fault line. Instead of a few major faults, there is actually a vast interconnected network of more than 350. 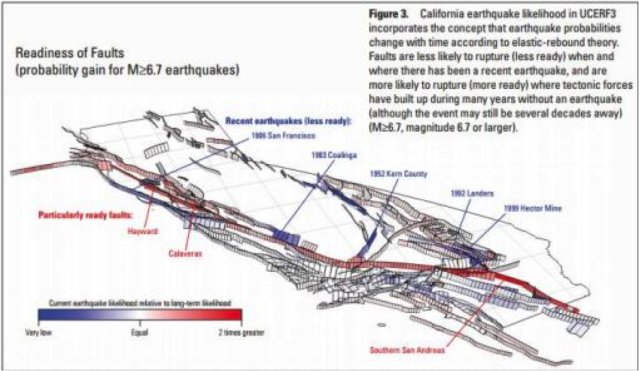 The two major conclusions from the study are that medium sized quakes (6-8) are less likely while large quakes (8+) are more likely. This means that large old buildings are at increased risk while smaller single story buildings will be safer. Engineers are constantly making improvements to buildings to make them more earthquake resistant.

In the movie, skyscrapers fall over like dominos and a giant tsunami engulfs the city. In reality, tall buildings are built to be flexible so if the building did collapse it would collapse from the top down. A large tsunami would also be impossible because the San Andreas Fault is far enough inland.