How To Get Rid Of Flies

Home > How To > Insect Control > How To Get Rid Of Flies

Flies are a perpetual nuisance, anywhere you go. When I was twenty three, my cousin and I sailed from Manhattan to Cape Cod in a small boat with an unreliable 1000 pound, 4 horsepower engine. At some point the engine decided to take a break for a few days and we were becalmed in the middle of the long island sound. A group of tiny horseflies discovered us and proceeded to drink our blood for several hours while we flailed around in an attempt to kill the little punks. After substantially increasing in size, the flies flew away and had thousands of baby flies. 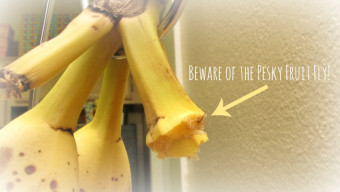 There are about a quarter million different types of flies in North America and I find all of them to be annoying. For the purpose of controlling a small scale home invasion, we can focus on large flies attracted to rot and smaller flies attracted to sweet things. The big flies that are usually seen hanging around dumpsters are drawn by rotting flesh, in which they also lay their eggs. Smaller flies, which I’m going to call gnats are drawn by sweet things like fruit and often come from eggs laid in the ends of bananas. The easiest way to prevent fruit flies is to cut the ends off bananas and throw them away outside.

Here in sunny rainless Los Angeles, the flying insect problem is small because of the drought conditions. Most flying insects require water to breed so often they won’t get the chance due to the lack of puddles and other standing water. One of the results is that the flies will be extra eager to get into your sink and procreate. 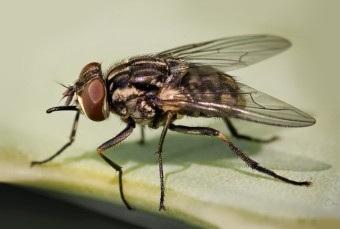 One direct approach is to run around the house spraying toxic poisons at every fly you see, but I wouldn’t recommend this method as it will have negative impacts on the occupants’ general health. Fly traps are the way to go and there are a number of different designs. The traps usually use a combination of bait, sticky paper, and the fly’s own stupidity to trap them. The bait for fruit flies is usually something sweet like banana or apple cider vinegar. The bait for large flies is something that resembles the smell of rotting flesh. These traps should be placed far away from people as possible because the smell of the bait is highly offensive. Once the flies get into the trap, they are too dumb to escape and also it must smell great so why leave?

It is always important to not let a trap sit for too long because the flies will start to lay eggs in the bodies of their dead comrades. Flies aren’t squeamish about, well, anything.