Lightbulbs Of The Past And… Of The Future

Despite the fact that folks have been using fire as light for a few million years, we have only moved away from this trend in the last few decades. The lightbulb invented by Tomas Edison is basically a small controlled fire. In essence, incandescent lightbulbs are safer versions of candles. So while one does not need to worry about burning the house down anymore, only about five percent of the energy used is producing light.

There are two main types of bulbs that are being introduced to replace the highly inefficient Edison style bulbs, Compact Fluorescent (CFL) and Light Emitting Diode (LED). CFLs are much more widespread in the United States because they are cheaper than LEDs. LEDs are much more efficient and have other advantages over CFLs so at some point all lights will be LED.

Incandescent lightbulbs produce light when an electrical current is run through a metal filament, causing it to glow.

CFL bulbs produce light as electricity goes through argon and mercury gas and is reflected as visible light.

LEDs produce light as electrical current passes through a semiconductor which lights up the diode.

Many producers of CFLs and LEDs claim their bulbs will last as much as ten times longer than incandescent, but only time will tell which designs and manufacturers will actually last that long. The major issue with CFLs is how to dispose of them because they do contain a small amount of mercury. This means that you are not allowed to throw them away with the trash and must be recycled as hazardous waste. LEDs are the most energy efficient, last the longest, and are non-toxic. The only issue right now is there are many different companies manufacturing LEDs with different levels of quality and price. 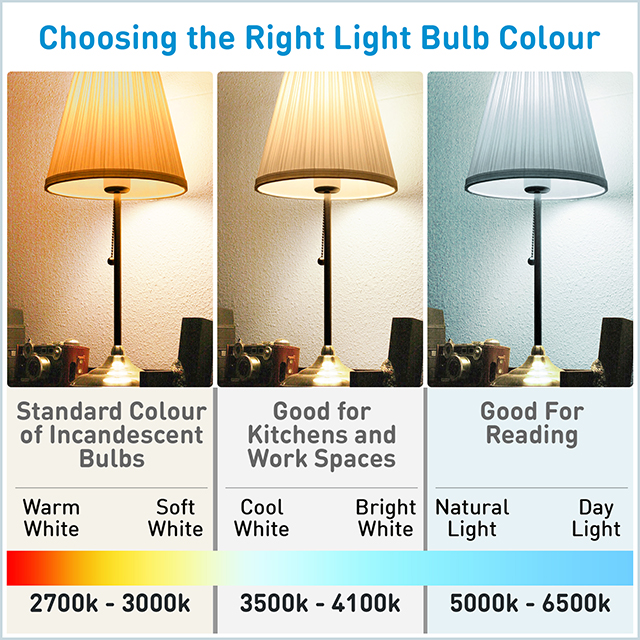 Personally I prefer warm white light for all applications, cool white makes my apartment look like a supermarket and daylight just looks strange to my eyes. Different color temperatures will change the way a space looks quite a bit. Picking the right lightbulbs for your home should take into account aesthetics, cost, and environmental impact.

Also Sony has just come out with an LED that is also a Bluetooth speaker!