At Tashman Home Center,  we provide an expansive range of entry and exterior doors and interior doors. In discussing the replacement of a client’s historically incorrect front door with one that was appropriate to his home’s architecture, he asked me what I knew about the history of wooden doors. I had to admit, not much. But his question piqued my curiosity so, I decided to do a little research. 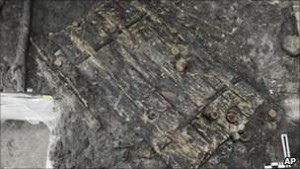 One of the oldest doors ever found in Europe – remarkable because of the way the planks were held together – was discovered at a dig preceding the construction of an underground car park for Zurich’s opera house.

Built around the same time as Stonehenge  (3063 BC), the 5000 year old door was made of poplar wood – both solid and elegant with well-preserved hinges. The door would have been part of a wooden stilt house designed to keep out the cold winds blowing across Lake Zurich,

The world’s largest wood door or gate is in the United Arab Emirates and is dedicated to the country’s president Sheikh Khalifa. The door is made of teak and stands more than eighty feet tall. (see above).

A Bit Of History

Cavemen got tired of predators wandering into their caves and causing trouble so they decided to create a barrier that would be easy for humans to get through but hard for animals without opposable digits. While stone and metal were often used in monumental doors such as in Temples and government buildings, local wood was the common man’s material. The exception was King Solomon’s temple, whose door was made of olive wood. Asian doors from antiquity often included rice paper framed by bamboo.

Moving up to the High Middle Ages, the designs become unique to a historical period and region. For example English doors from the Tudor period (1485-1625) are very different from English doors during the Baroque period (1625-1715). Discussing the obvious inferiority of wood doors during the British Victorian period (1837-1901) to those of the American Victorian period (1840-1910) seems like a good way to get into a fist fight with a woodcarver. These detailed changes are meticulously cataloged by the woodcarver’s guild of London (est. 1208 AD).

We can touch upon a few of these design periods as some of the styles are still popular today. 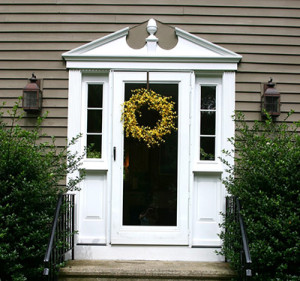 As the name implies, these doors are of a style adopted by the European colonies. They were generally constructed with wood slates and little decoration. As the colonies became more cosmopolitan, the main entry doors were often carved in patterns akin to their European counterparts.

Any respectable art history student would be very upset with the above pairing but the two styles are very complicated and inspired by the respected art movements of the times.

The greatest advancement in wood door technology is the ability to make doors that don’t warp with heat and humidity. Making doors out of wood composite with a nice solid wood veneer mitigates the negative atmospheric effects.

To see a selection of both period and contemporary exterior and interior doors visit out website www.tashmans.com or stop by our showroom at 7769 Santa Monica Blvd, West Hollywood 90046.  See Map